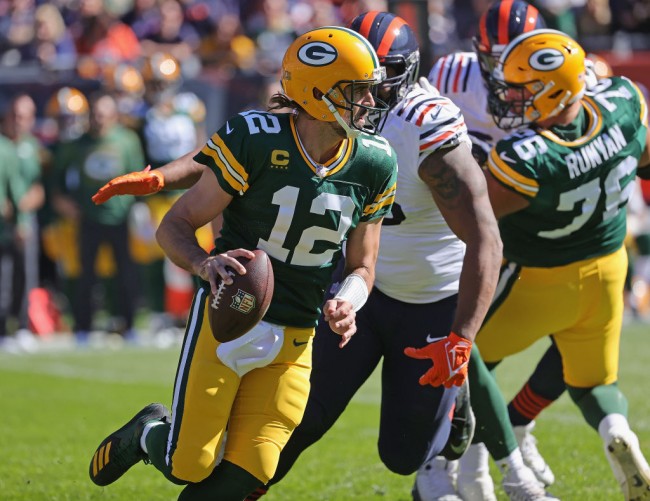 CHICAGO, ILLINOIS – Aaron Rodgers (#12) of the Green Bay Packers is chased by Akiem Hicks (#96) of the Chicago Bears at the Soldier Field on October 17, 2021 in Chicago, Illinois. The Packers defeated the Bears 24-14. (Photo : Jonathan Daniel/Getty Images)

Fresh off an emotional win over the Chicago Bears in Week 6, Aaron Rodgers and the rest of the Green Bay Packers will look to make it six victories in a row when they host the Washington Football Team in Week 7. Who will prevail in this Washington vs Green Bay clash?

The alarm bells are beginning to ring for the Washington Football Team, who now trail the Dallas Cowboys by three games in the NFC East division after a 31-13 loss to the Kansas City Chiefs on Sunday. Washington has lost four of its first six games this season, including its last two outings.

It won’t get any easier for them in Week 7 as Washington will face a Packers team that has yet to lose at home this season. It’s critical for Washington that Taylor Heinicke starts strong in this contest. He struggled mightily against the Chiefs, completing just 24 of 39 passes for 182 yards with one touchdown and one interception.

The main concern, however, for Washington this season has been its atrocious defense. Much was expected from Washington’s defense entering the 2021 campaign after allowing the second-fewest total yards and second-fewest passing yards in the NFL last season.

Washington has taken a step back in that department, with Ron Rivera’s men ranked 31st in the NFL in total defense, allowing 423.0 yards per game this season. Washington has now conceded 30-plus points in each of its last four contests. They will have their work cut out for them against a Green Bay team that is averaging 31 points per game at home this season.

Green Bay extended its winning streak to five games with a convincing 24-14 victory over the Chicago Bears in Week 6. It was a huge victory for the Packers, who maintained their one-game lead over the Cincinnati Bengals atop the NFC North standings.

Aaron Rodgers led the way for Green Bay in the Week 6 win, completing 17 of 23 passes for 195 yards and a couple of touchdowns. Rodgers also did some damage on the ground, sealing the win with a six-yard touchdown scramble in the fourth quarter that gave the Packers a 10-point advantage.

Rodgers’ 22-5 slate against Chicago gives him the third-best winning percentage (.815) by a quarterback against one team with a minimum of 25 starts since the 1950 season. Only Tom Brady (32-3 vs the Buffalo Bills, .914 win rate) and Ben Roethlisberger (23-3-1 vs the Cleveland Browns, .870 win rate) have had more success over a single opponent.

Over 2 Lakh Cryptocurrency Accounts have been Banned in India