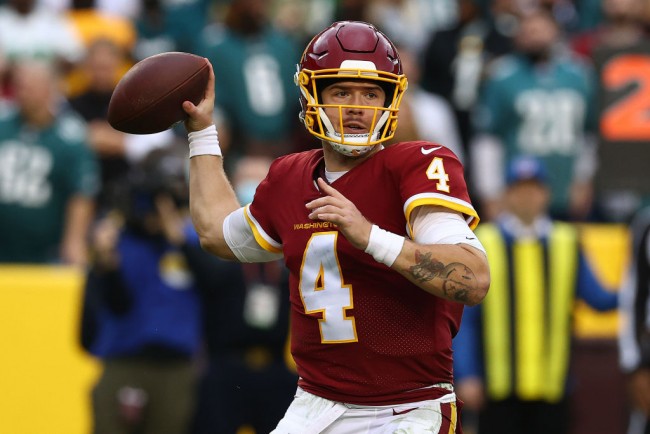 LANDOVER, MARYLAND – Taylor Heinicke #4 of the Washington Football Team throws the ball during the second half against the Philadelphia Eagles at FedExField on January 02, 2022 in Landover, Maryland. (Photo : Todd Olszewski/Getty Images)

Two NFC East teams will square off in Week 18 as the Washington Football Team take on the New York Giants at MetLife Stadium. Who will record the much-needed victory in this Washington vs New York clash? Here’s a preview of this divisional matchup.

Washington stumbled to its fourth straight defeat in Week 17, losing 20-16 to the Philadelphia Eagles. They had no answer for Jalen Hurts, who accounted for 259 total yards. It was a costly defeat for Ron Rivera’s men, as they got eliminated from playoff contention.

For Washington to end its season on a winning note against New York, they will need to get a much better showing on the offensive end. Washington laid a goose egg in the second half, helping Philadelphia turn a nine-point halftime deficit into a four-point win in the end.

Taylor Heinicke is one guy who needs to step up for Washington in the regular-season finale. He completed 27 of 36 passes for 247 yards with no touchdowns and one interception in the loss to the Eagles. Heinicke has thrown for 3,299 yards, 20 touchdowns, and 15 picks this campaign.

Help is on the way for Washington with left guard Ereck Flowers, top running back Antonio Gibson, and punter Tress Way set to return after missing the Week 17 clash because of COVID-19 protocols. Through 15 games, Gibson has run for 891 yards and six rushing touchdowns on 237 carries. He also has caught 41 passes for 289 yards and three touchdowns this season.

New York’s losing woes show no sign of ending as the Giants crashed to their fifth consecutive defeat with a humiliating 29-3 loss to the Chicago Bears in Week 17. The Giants had no answer for David Montgomery, who ran for 64 yards and a couple of touchdowns. The Giants dropped to 4-12 for the season as they finished their road campaign with an abysmal 1-8 slate.

The Giants had their worst performance of the season in the loss to the Bears, racking up just 151 total yards. The Giants set a season-low in yardage for the second straight week. They were held to just 192 yards in their previous loss to the Philadelphia Eagles.

Mike Glennon struggled mightily against Chicago, completing just 4 of 11 passes for 24 yards with no touchdowns and a pair of interceptions. Glennon was pressured all afternoon as he was sacked four times for a loss of 34 yards. He finished with a low passer rating of 5.3.

For the Giants to return to the win column against Washington, they will need to get another huge game from Saquon Barkley. He was the lone bright spot for the Giants in the loss to the Bears, running for 102 yards on 21 carries. It was the most rushing yards for Barkley since the 2019 season. He pulled it off in his first game in the Windy City since tearing both his ACL and MCL against the Chicago Bears on September 20, 2020.