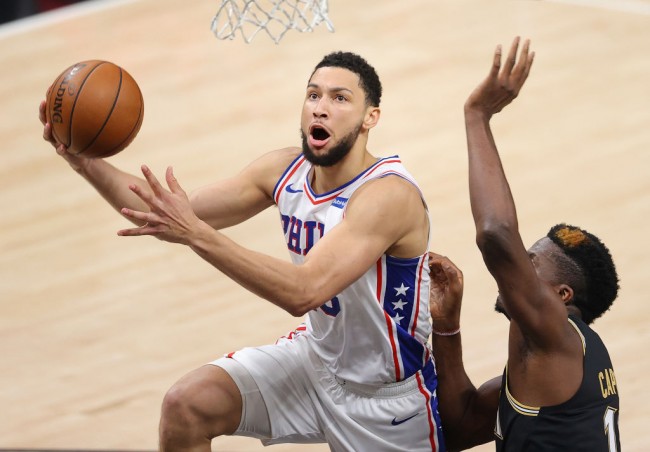 ATLANTA, GEORGIA – Ben Simmons of the Philadelphia 76ers drives against Clint Capela of the Atlanta Hawks during the first half of game 4 of the Eastern Conference Semifinals at the State Farm Arena on June 14, 2021 in Atlanta, Georgia. (Photo : Kevin C. Cox/Getty Images))

The prodigal son has finally returned to the City of Brotherly Love with Ben Simmons making a surprise appearance at the Wells Fargo Center on Monday night. Two days after Simmons started the process of returning to the Philadelphia 76ers, from which he demanded a trade request, head coach Doc Rivers admitted that the Australian star’s playing status for the upcoming season remains uncertain.

Rivers told reporters on Wednesday during the Sixers’ team practice that he is still unsure of the status of Simmons’ trade request, saying, “I don’t know. He’s voiced that, but we’ll see how that works out.”

Simmons surprised members of the organization by showing up at the Sixers’ home arena before their preseason game against the Brooklyn Nets on Monday. After arriving from Los Angeles, Simmons went straight to the Wells Fargo Center to take the necessary COVID-19 test.

Rivers met with Simmons on Tuesday, describing the three-time All-Star as looking great and good. Rivers said that Simmons was set to return to Philadelphia’s training facility on Wednesday for his individual workout. He needs to clear health and safety protocols first, though, before practicing with the 76ers.

However, it is still unclear whether Simmon’s intention with his return to Philadelphia is to merely report to the Sixers or, indeed, rejoin the franchise. The Sixers only have one preseason game remaining, with Philadelphia set to face Detroit on Friday. They then open the new season next week on the road in New Orleans.

Will Simmons play again for Philadelphia?

The biggest question right now for the Sixers faithful is will Simmons play for Philadelphia again this season. He has made it clear that he wants out of Philly, even sitting out the entire training camp and some of the Sixers’ preseason games to drive home his point. That message proved costly for Simmons, though, who lost approximately $1 million in salary due to fines.

The problem for Simmons is that the trade market for his services has dried up. To help reinvigorate his value in the marketplace, Simmons has decided to end his holdout, which comes after several weeks of discussions between his agent, Klutch Sports CEO Rich Paul, and the Sixers’ top brass.

Despite their disagreements, Rivers still wants Simmons to suit up for Philadelphia once again, saying, “I’m assuming he’s going to play, but who knows? I can’t get in anyone’s head.” Simmons may have his offensive liabilities, but the Sixers are still a better unit with him on the roster. Simmons averaged 15.9 points, 8.1 rebounds, and 7.7 assists over four seasons with Philadelphia, the only team he has played for in his NBA career.