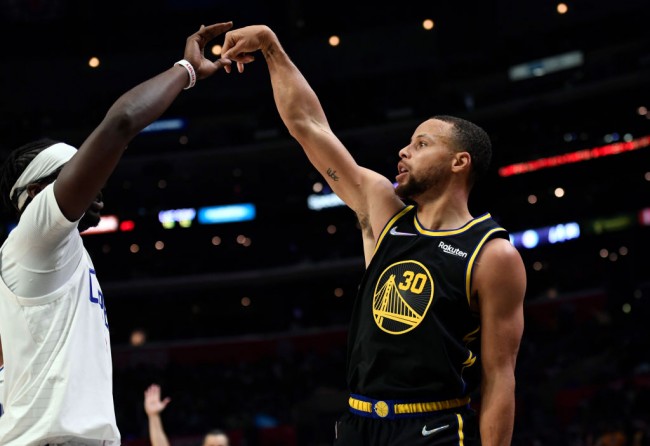 LOS ANGELES, CA – Stephen Curry #30 of the Golden State Warriors celebrates scoring a three-point basket against the Los Angeles Clippers during the second half of the game at Staples Center on November 28, 2021 in Los Angeles, California. (Photo : Kevork Djansezian/Getty Images)

On Sunday, the Golden State Warriors extended their winning streak to eight games with a convincing 105-90 victory over the Los Angeles Clippers. Stephen Curry once again starred for the league-leading Warriors, who regained their one-game advantage over the sizzling Phoenix Suns in the Western Conference standings.

Curry went berserk after he was given a technical foul with 9:08 left in the fourth quarter. He lost his cool when he did not draw a foul call from the referee while driving to the basket. Curry argued that Terrence Mann made contact with him during the possession, pumping his fist as he pleaded his case with the official.

The referee did not like Curry’s reaction to the non-call, handing a rare technical to the three-time NBA champion. Curry used that as motivation, though, spearheading the Warriors’ attack in the closing stages. He scored 11 of his game-high 33 points following that controversial technical foul, igniting a 21-7 run for the Warriors in five minutes.

During that period, Curry used the long ball in devastating fashion, knocking down three 3-point attempts to bury the Clippers. He shot 12 of 22 from the field, including 7 of 13 from deep. Curry also had six assists, five rebounds and a season-high six steals in a brilliant all-around performance.

Golden State’s defense was also instrumental in the win, with the Warriors recording a season-high 19 steals. The Clippers’ offense floundered, as a result, committing a season-high 25 turnovers, resulting in 31 Warriors points.

That will serve the Warriors in good stead ahead of their much-anticipated showdown with the Phoenix Suns on Tuesday night. The Suns are on the verge of tying their franchise record for consecutive games won, having recorded their 16th straight win on Saturday against the Brooklyn Nets.

Five players scored in double figures for the Suns, who pulled off a 113-107 victory over the Nets. Devin Booker was unstoppable once again for Phoenix, scoring 30 points on 9 of 18 shooting from the field. Chris Paul provided valuable support, scoring 22 points, grabbing eight rebounds and dishing out five assists.

Mikal Bridges stole the show on the defensive end, clinching a career-high seven steals to go alongside his 13 points and six rebounds. Deandre Ayton and Javale McGee wreaked havoc down low for the Suns, combining for 20 points and 16 rebounds.

The Suns will face their toughest test, though, against the Warriors, who own the NBA’s best record this season with an 18-2 slate. Golden State has been in fine form on the offensive end, scoring at least 100 points in each of its 20 games this season.

Top Practical Data Science Skills to Equip Yourself with for 2022

Top 10 Emerging Cybersecurity Companies to Look Out for in 2022