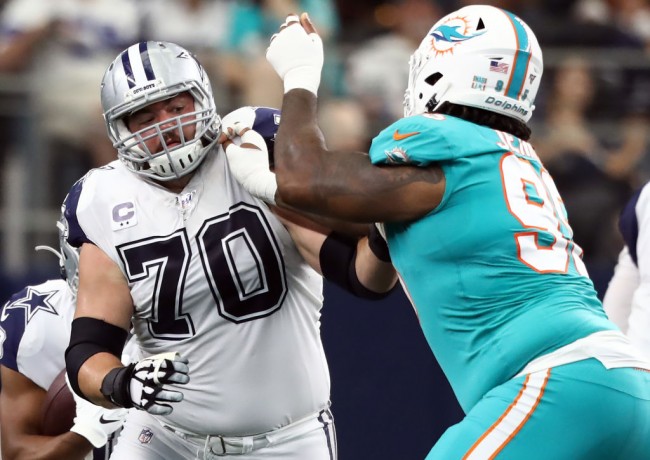 Dallas Cowboys’ preparations for their much-anticipated season opener against the Tampa Bay Buccaneers have taken a huge hit after Zack Martin tested positive for the coronavirus over the weekend, landing the six-time Pro Bowl right guard on the reserve/COVID-19 list.

Cowboys owner Jerry Jones isn’t losing hope that Martin can recover just in time for Thursday’s blockbuster clash, saying on the ESPN show “First Take” that he could still play and that he will need two negative tests in the next couple of days.

Can Martin still play against the Bucs?

Jones isn’t wrong with that point, but the chances of that happening are very bleak at this stage. Based on the league’s return-to-play protocols, Martin, who is vaccinated, can return to action in five days if he does not have symptoms following two negative COVID-19 tests separated by 24 hours.

Head coach Mike McCarthy has already accepted that the Cowboys will have to go to the lions’ den without one of their best players. He said on Monday that they are already preparing to face the reigning Super Bowl champions with Connor McGovern at right guard. He started eight games for Dallas last season, six of which came when Martin was injured.

The loss of Martin is a bitter pill to swallow for a Cowboys offense that did not take a snap together at full strength this preseason. Much to the dismay of its rabid fans, Dallas held out quarterback Dak Prescott throughout the Cowboys’ four preseason games because of a shoulder strain.

Cowboys’ running game to suffer without Martin in Week 1

Dallas’ projected starting offensive line of Martin, Tyron Smith, Connor Williams, Tyler Biadasz, and La’el Collins played just three series together in the Cowboys’ preseason campaign. Martin’s likely absence from that line will spell further trouble for a Cowboys offense that will have to contend with a Buccaneers run defense that was the best in the league last campaign.

Running Back Ezekiel Elliott knows fully well Martin’s importance to the team, saying, “Zack’s our best player on our offense. I mean most runs, they coming back behind him.” Last season, the Cowboys averaged 4.5 yards per rush with Martin on the field. That figure dropped to just 3.8 yards per rush when the Cowboys were without Martin.

That is why Jones is hoping for a miracle with Martin, saying he will be tested right up until game time to see if he can still suit up for the match against the Bucs. Martin isn’t the only concern for Dallas regarding its battered offensive line, with Collins still dealing with a stinger issue and Williams missing the past two weeks of practice due to COVID-19 as well.